As a novelist, I’ve dealt with great reviews and awful reviews for my books, but I’ve never been as delighted by a review as this one.  Two nights ago, our first feature horror film “Island Zero” (written by me, directed by my son Josh) screened at the Boston International Film Festival. It was open to the public, so we had no idea who might show up.  It turns out a reviewer for a Los Angeles-based movie review website was in the audience, and this morning we woke up to this:

As the film starts, a marine biologist named Sam (Adam Wade McLaughlin) suspects that something suspicious is happening on the island. He made a case study four years prior following evidence that marine life was disappearing at an alarming rate in coastal regions of the northern portion of the United States. His girlfriend, Lucy (Terri Reeves) is ready to leave Maine to return to her home in Boston, while Sam’s daughter Ellie (Elaine Landry, making her screen debut) is more focused on her Christmas presents.

Rounding out the ensemble, we also have a novelist named Titus (Matthew Wilkas), who has been staying on the island for a while gathering inspiration and local waitress Jessie (Joanna Clarke). We also have an elderly couple (Anabel Graetz and Richard Sewell) who continually quarrel on how hot it is in their home and a local restaurant worker named Val (Stephanie Atkinson), who is trying to understand why the local ferry has not returned as scheduled.

Soon enough, people are attacked and then mysteriously start to vanish from the island. The evidence found is either a great deal of blood, or body parts found on the beach. Sam enlists the help in a local doctor Maggie (Laila Robins) for help in examining the found body parts and homes that shows definite signs of a struggle. People are killed near the water and even in their homes while their bodies are never found. Without getting into spoiler terrain, worth mentioning is the gripping tension clear and present on behalf of Gerristen, marking an impressive first show. Equally, tender moments of reflections as the characters begin to piece together just what is happening mark a tremendous sense of grounding to Island Zero. Tense, emotional, and at times quite funny, Island Zero is a good mix of everything. 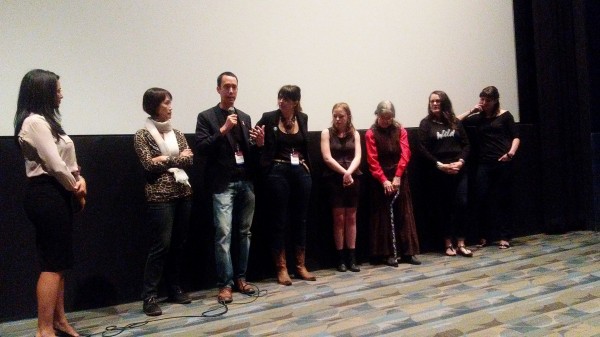 Cast and Crew at the screening of the film

Island Zero, without a doubt makes use of horror and suspense without pushing too hard in order to force anything too quickly or cheaply. What we are given is something unique, nearly reminiscent in pace and mood to a strong Stephen King novel. With plenty of intense situations, a blood inducing action, Island Zero stands out and rises above mere genre convention. As a plus, the strong cast, grounded writing and a piercing score contribute mightily in boosting the thrills and chills.

THE APPRENTICE is the second book in the RIZZOLI & ISLES series. In this sequel to the bestselling thriller THE SURGEON, it is now a year later, and Detective Jane Rizzoli is back on the force struggling to heal from the physical and emotional wounds from her brutal attack at the hands of the sadistic villain Warren Hoyt.

Though imprisoned, Hoyt still haunts a helpless city, seeming to bequeath his evil legacy to a student all-too-diligent . . . And all-too-deadly.

Although it is my second RIZZOLI & ISLES book, THE APPRENTICE has many “firsts.” Most importantly, we meet Dr. Maura Isles, Boston Medical Examiner aka “The Queen of the Dead” for the first time as well as FBI Special Agent Gabriel Dean and Detective Vince Korsak.

For a limited time, the eBook price of THE APPRENTICE is just $1.99 in the US! I invite you to please share this special offer with your friends who may not have yet discovered the Rizzoli & Isles series.

This edition also includes a sneak peek from my newest Rizzoli & Isles book, I KNOW A SECRET, coming 8/15/17!

If you’d like to get an early look at our horror film “Island Zero,” it will be screened at the Boston International Film Festival at 9:30 PM April 15 at the historic Paramount Theater in downtown Boston.  Based on my original screenplay, it’s the story of an isolated island off the coast of Maine where the local fishing community is suddenly cut off from the outside world when the ferry stops coming. The phones are dead, the power’s out, and every fishing boat they send to the mainland fails to return.

When mutilated bodies start turning up on the island, the survivors must find out who — or what — is killing them.

Filmed entirely on mid-coast Maine during a cold, dark March, “Island Zero” is an homage to the old monster films I loved as a child, combined with stark Scandinavian overtones of drama and isolation.

Our production team will be there to give a talk afterwards.  Come hear how we managed to make a feature film on a low budget — complete with a burning house!

Feels like deja vu all over again.  My readers have been emailing me that the plot of the new movie “Life” sounds awfully similar to my novel “Gravity.”  While I haven’t seen the film yet, here’s the IMDB description of “Life”:

A team of scientists aboard the International Space Station discover a rapidly evolving life form (single-celled organisms), that caused extinction on Mars, and now threatens the crew and all life on Earth.

And here’s a description of my 1999 novel GRAVITY:

A mission aboard the International Space Station turns into a nightmare beyond imagining when a culture of single-celled organisms begins to evolve and infects the space station crew with agonizing and deadly results. The contagion now threatens Earth’s population, and the astronauts are stranded in orbit, quarantined aboard the station — where they are dying one by one…

The major difference seems to be the source of the single-celled organisms.  In both stories, the cells are extraterrestrial.  In “Life,” they’re harvested from Mars where they have been dormant because of a lack of oxygen.  In “Gravity,” they’re harvested from an asteroid that landed at the bottom of the ocean, where they have been dormant because of the pressure of deep water.  But in both cases, the organisms are brought aboard ISS, where they become multicellular and begin to evolve into something dangerous that kills the astronauts in gruesome ways and threatens all of earth’s population. (In my book, the alien cells infect a mouse, integrate mammalian DNA into their genome, and rapidly evolve.)

In my novel GRAVITY, the ISS crew of six is made up of two women and four men.  They include a Russian, a Japanese man, an Englishwoman, and a Black astronaut.

In “Life,” the ISS crew of six is made up of two women and four men. They include a Russian, a Japanese man, an Englishwoman, and a Black astronaut.

It’s mathematically improbable that the near-identical national make-up of these two crews  is merely coincidental.  Really, Hollywood?  You didn’t bother to change one of my characters into someone different, say an astronaut who’s Indian or Chinese or Hispanic or French?  With so many nationalities of astronauts to choose from, you just happened to go with the exact ethnic and national mix of my fictional crew?

Does this feel like a giant rip-off of my novel?  Yes.

Am I going to do something about it? No.

The film rights to my novel “Gravity” are still held by New Line Cinema/Warner Bros., so they are the only ones who can sue for copyright infringement.  After my breach-of-contract lawsuit about “Gravity” the movie, I know that no lone writer can win a lawsuit against a Hollywood studio.  Fifty writers over twenty years have tried to sue– and failed in the Ninth Circuit.  (Although there’s one plucky screenwriter who’s trying to find justice, and I hope you all give him your support as his lawsuit progresses.) There’s nothing I can do about this,  even though it certainly feels like my novel was the inspiration for two films, now.  The movie “Life” has the same plot as the first 3/4 of my book, with an alien organism evolving into something deadly aboard ISS, resulting in the gruesome deaths of astronauts.  The plot of the movie “Gravity” comes from the last 1/4 of my book, after all but one astronaut is dead and that lone surviving woman, now stranded on ISS, fights to survive. My book had a lot of plot — enough to be scavenged for two films.

A pity no one thought to give my novel at least a little credit.

It’s more than a little grating to hear the filmmakers tout their story as the first to be about real science aboard ISS, the first to look at true microbiological horrors that could threaten earth itself.

My novel was published in 1999.  They’re eighteen years too late.